January was a free trial month. Everybody knows that now is when it properly kicks off anyways…

Recap: the end of 2017 was fezzy to say the least. There were several client Christmas parties, gatherings with friends, some traveling and LOADS to eat along the way. ‘Twas the season to be jolly! There’s nothing wrong with that. But now the only thing shaking all over since those jingle bells are gone, is me. *Violently contours Christmas double chin in a way that’d make Kim K-W proud.

So, whilst I’ve  totally returned to the world of healthy eating and working out (just kidding, I leave for London this week), I figured I’d take a look back on my recent trip to Italy (Venice and Selva Val Gardena). If you’re in it to win it, keep reading. Here’s a little run-down of what I did (read: ATE). 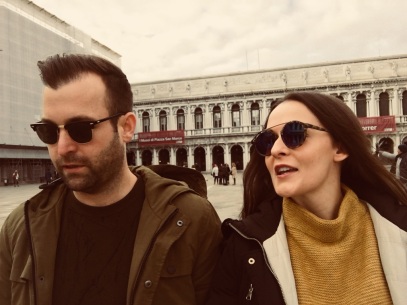 For starters, the weather was mizz. Boo. And as you’d probably have guessed, when it’s winter and colder than a witch’s tit, you eat. A lot. Possibly enough for a small country and even a couple of its neighbouring ones. Luckily, I was too busy walking a gazillion steps a day and fleeing from savage pigeons, so I know for sure I burned calories. For reals though, me + pigeons = trauma. But luckily for the pigeons, this guy was happy to sit and chat… Bless.

Seriously. Whatever your flavour, they’re bound to make one just for you. My top choice was obviously pistachio, but the lemon, coffee and white chocolate ones were all just as delicious as well.

Top Cannoli Tip: One must NEVER make eye contact with strangers whilst eating one. It’s just awkward for everybody.

Little did I know that my first night in Venice would offer me the penultimate contestant in the battle for best Tiramisu. My father-in-law is a connoisseur of this dessert (that, as well as cheesecakes, pizzas and ice cream sandwiches). Anyway, he said that this was arguably one of the best Tiramisus he’s ever had. (The best is yet to come though, so just sit tight). Obviously, the one on the right is the T-dog. The chocolate delight on the left was also a real treat, figuratively and literally.

AMO (the name of the cafe) had the coolest vibe and made the most incredible desserts. Ryan had a pistachio macaron but by the time I’d whipped out my phone, he’d inhaled it like it was about to be stolen from him. He’s smart like that.

Sure, there were pizzas, pastas and loads of other amazing things in Venice but we were saving ourselves for the main event: Selva. A ski village full of so many delicious things that it’d be a sin not to try everything. And try everything we did…

It was peace out to Venice and “howzit” to snow and all things scrumptious.

Imagine a restaurant owned and run by an Italian granny and grandpa. From delicious and unpretentious family recipes to the warmest welcome, always – it’s here that you’ll find the realest of all the real deals… Naturally, we made a beeline for La Bula on night one (and on several other nights) to celebrate being back in Selva.

Hands down the lightest and creamiest Tiramisu you’ll ever eat. (I’m 110% sure). When a plate like the one above gets to the table, it’s every man for himself and if you lose a pinky in the tussle, so be it. One of these is enough to send you over the edge and there really is no refusing it. Just when you’ve convinced yourself that you cannot possibly eat anything more, your inner Guy Fieri takes over and sends you on an express trip to flavour town.

“And that’s all she wrote…”

Where’s the pizza at?

Yes, I know I’m skewed towards the sweet side of things but here’s a little something for the pizza monsters out there…

Some of the pizzas we enjoyed like the one above, were classics like the humble Diavola (spicy salami and peppers) and Quattro Stagioni. But in true Italian sourcery, EVERY SINGLE ONE WAS GOOD. How would I ever choose a winner?

“And then a hero comes along”…

For me, it was the Bresaola e Ruccola. For those who don’t talk foreign, it’s bresaola and rocket.

So nice, I had it twice. The second time I had it though, the waitress brought me someone else’s pizza. Due to my bottomless pit of hunger, I wasn’t thinking straight. I then threw enough chili oil on it to dissolve every one of my vital organs. That was until I realised that I was looking at Parma ham. CRISIS. Better than that, the guy at the next table was watching me do it. (Creepy right? Even me, I thought this). When the waitress realised (not witnessing the baptism of chili) she took the pizza away and gave it to my spectator. For a second, he and I locked eyes and telepathically, I sent my condolences to his family. Luckily, he appeared to like chili as much as I do or at least, he legit pretended to.

Chili guy, if you’re reading this – you’re the real MVP. Give that man a Bells (and water. In a tall glass though).

What was all the fuss about? THIS. RIGHT. HERE.

I know. It makes me emotional too.

Okay, but this is the weirdest thing though, nobody seems to slice their pizza. Or perhaps they slice them for the locals and enjoy watching the tourists make absolute muppets of themselves. I guess we’ll never know…

After this trip, I can truly say that I’m a full-blown Pastafarian. I don’t think there was a single day that I didn’t have a pasta. Also, my jeans won’t tell you otherwise. #noragrets

Here’s a quick little overview of some of the highlights… 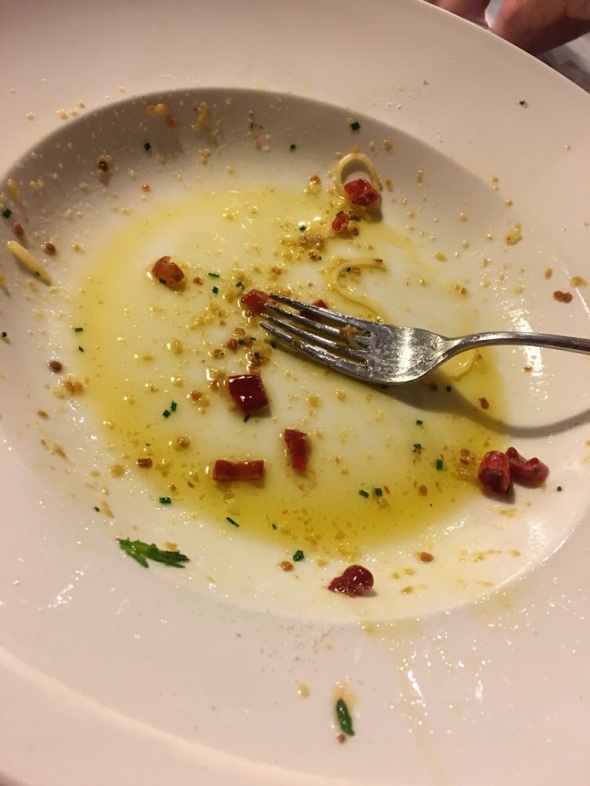 The above was the remains of the best Aglio e Olio I’ve ever had. Served at… wait for it – the local ice rink! Although, when I asked for Parmesan I got judging eyes. Apparently, you’re not supposed to put Parmesan on an Aglio e Olio but you know, I live on the edge and all of that. So I just told the aunty to bring some and be done with it.

The bottom line: fresh pasta is king. I now shudder at the thought of having to eat dried pasta from a packet. So if y’all don’t mind, I’m gonna keep the Fattis and Monis granny in the cupboard where she belongs. I’ve since made it my mission to master the perfect pasta from scratch. Although it must be said that I haven’t had a pasta since the trip, so it’s safe to say I’m in recovery. For now…

Okay, so it wasn’t all lunch and dinner on the food front.

Allow me to set the scene: Potato, speck, egg and cheese. Honestly, it’s all you need to be happy in life. It’s also a meal that’s big on the slopes.

Whilst we’re on the subject of cheese, their platters of the local stuff were epic too. 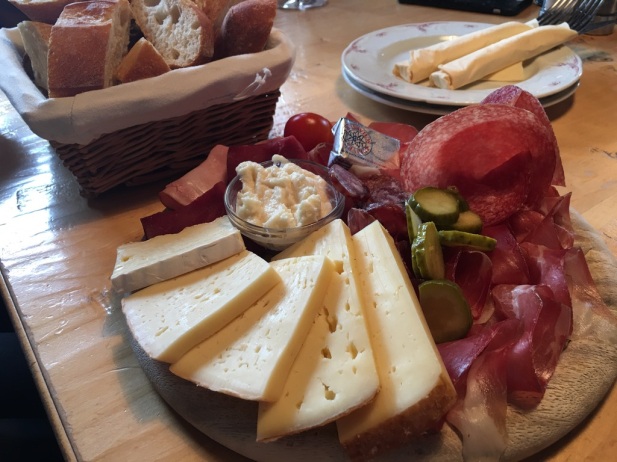 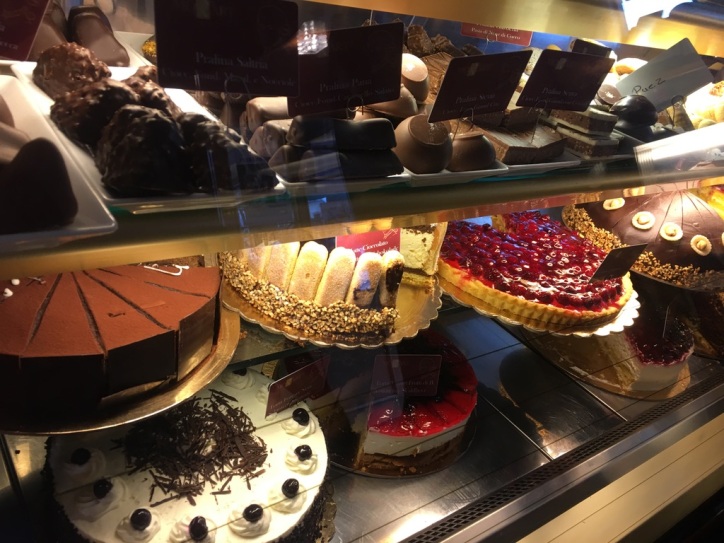 Of course, I couldn’t only eat Tiramisu the entire time I was there. (Not for lack of trying though…) These guys do decadent and trust me when I say, they do it WELL. Their little bakeries and coffee shops have so many enticing treats just waiting to tempt you. And sometimes, you could drink them as well.

There were so many standout hot chocolates in Selva. The cool thing is that they were all different. Some were a thicker “fondant” type that tastes like a hot chocolate custard:

And others were the classic kind, topped off with cream.

Most of the time, I put rum in these guys. But it’s all fun and games until you take a stranger’s ski poles home or fall off a chairlift. (Guilty as charged on both). Those things can really stick you in the bush… The hot chocolates, not the ski poles or the chairlifts. Ha.

Best panna cotta of my entire life goes to this little guy:

It was espresso flavour with a pistachio crumble and whole toasted pistachio nuts. If I could make a panna cotta half as good as this one, I could die happy. My husband said it was the best dessert he’s ever had. I saw flames and clapped back that I’d never make him anything EVER AGAIN. Deep down, I knew he was right. The fact that he doesn’t have a sweet tooth made it a particularly brutal blow. *Lies down in fetal position and rocks back and forth.

G is for Gelato 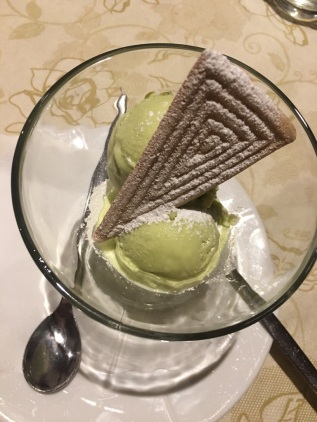 Being in Italy and all, of course, the gelato was the heat. Due to minus degree celsius temperatures though, I figured I’d rather ski in my snow than eat it. So, I must be honest and say that I only had gelato twice. As per usual – PISTACHIO OR NOTHING.

An eye for cheesecakes

The last time we went to Selva I fell in love with a naughty little ricotta cheesecake at La Bula. This time, I was adamant that our paths would deliciously cross again. With every visit, I’d peer into the dessert fridge, hopeful to spot my old flame. Alas, it never showed up. I’ve always joked that my eagle eye for desserts allows me to spot and correctly ID any and every sweet treat before ever tasting it. On our last night, my theory was proven correct. We walked to our table and I stopped, zeroed in on the fridge and went, “chocolate. ricotta. cheesecake”. Ryan laughed and said there’s no way it was that, it looked like some kind of chocolate ganache tart. We asked the waitress and there it was… A CHOCOLATE RICOTTA CHEESECAKE! 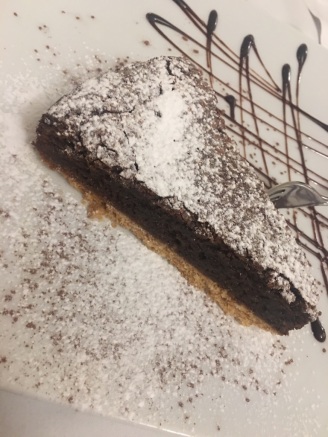 The most delicious crunchy base, topped with a light filling and served warm. Honestly, it’s a bit like a gooey brownie in terms of texture and taste but it’s something you have to try.

Now I’m back on the health wagon and living my best grilled chicken and broccoli life. It doesn’t help that I have a whole bunch of wedding cake orders though… #bakergirlproblems. Whilst I’d like to think that I’m done eating like I’ve never seen food in life, I know I’m not. I blame my fat kid tendencies. I do, however, promise a full report of all that London and Edinburgh have to offer!

Yours in baking, bitching and a bottomless pit of hunger (because “xoxo” is too mainstream) 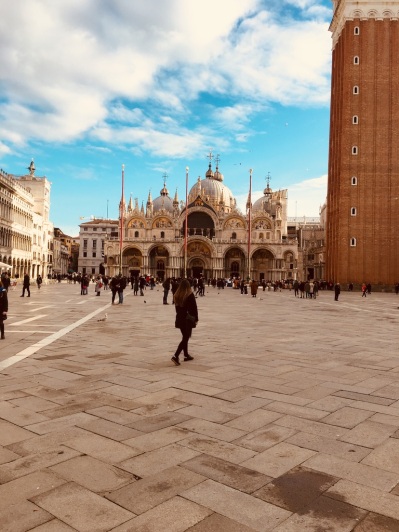