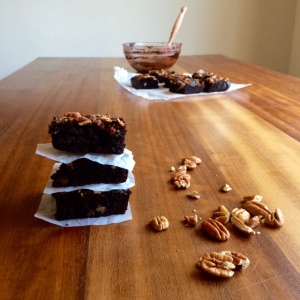 Jack Johnson was definitely on to something when he said that some things were, “Better Together.” Cookies and cream, wine and chocolate and of course bread and butter. You could always have one without the other, but let’s be real… life’s too short for that.

The world has seen its fair share of power couples. Some come and go, some are eternal and some are simply unstoppable. Bonnie and Clyde, Batman and Robin, Justin and Britney (in denim on denim, of course. Let’s just have a moment of silence for those two…May we never forget). This brings me to the power couple of this week’s featured recipe. Ladies and Gents, feast your eyes upon the disturbingly good pairing that is… bacon and maple syrup.

Although it’s a long-time favourite in the States, South Africans have yet to cotton on to this superb combination. (Come alive people!) I first stumbled upon it when I was about 16 or 17, which lead to my standard breakfast becoming 2 pieces of French toast stacked with crispy bacon and lashings of maple syrup. Needless to say I stopped this habit once I reached varsity and saw for myself that first year spread was real. Luckily I reeled myself back in. Others weren’t so lucky… (Cue the panpipes intro of Celine Dion’s “My heart will go on” and pour one out for one’s homies). Despite my ability to bounce back, I learned that no amount of dietary redemption would ever stop me from dreaming about it.

If bacon has taught me anything, it’s that I could absolutely never (I repeat never) become a vegetarian. The end of last year saw bacon become a food group to me, evident by the fact that on a week long holiday I consumed (with the help of Ryan of course) an entire Kilogram of bacon. This same holiday saw a visit to The Pop-Up Bacon Bar in Franschoek, a plethora of glorious golden pigs and a tribute to all things bacon-ey (is that even a real word? Probably not, but it is now). I often find myself reminiscing about it and I can honestly say that for the first time in my almost 24 years of life, I finally know what Celine meant when she said, “It’s all coming back to me now…” (Also, Celine = Canadian. Maple syrup = Canadian. Coincidence? I think not). 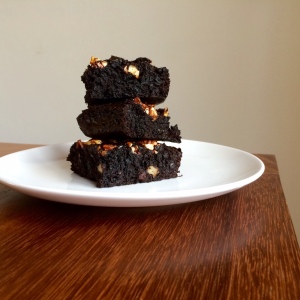 So as an ode to my beloved bacon, here’s a list of things that (I believe) can be cured with bacon:

My “Ya Bacon me Crazy” Brownies are an awesome assault on the taste buds. Rich, sweet and salty, these decadent darlings provide the full spectrum of taste experiences. They’re the ultimate in hybrid brownies and if you thought that bacon and maple syrup were a formidable combination, wait until you try bacon and luxurious chocolate brownie. A generous smattering of pecans add an extra bit of crunch to complement the bacon, making these bad boys outrageously good.

This one is for errrbody who loves them some bacon and for anyone who hasn’t yet discovered the sheer smoky joy of it. Because these brownies are a celebration of the different and unexpected, this one is for my sweet, gentle Lisa Meyer who taught me to embrace both.

Yours in Baking, Bitching and lashings of bacon (because “xoxo” was too mainstream and because bacon just makes everything better).

“Ya Bacon me Crazy!” Brownies

4 rashers of smoked, streaky Bacon (fried until just crisp and left to drain on paper towel)

Health hack: Don’t sweat it, Maple syrup is a healthy sweetener but to lessen the guilt of these guys, switch the sugar for Xylitol!