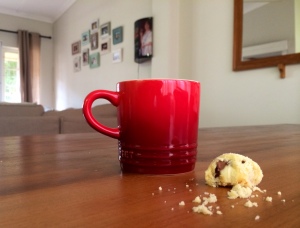 Thug life Thursday, noun: A day of the week that allows the white chocolate folk to exponentially bump up their street cred. High-tops are donned, snap backs are snapped and Drake blares on the iTunes of every semi-ghetto pale face. Similar to the observation of every Hump Day, Thug Life Thursdays demand to be celebrated. Much like paying your TV licence, it’s just the right thing to do. Feeling somewhat inspired on this Thug Life Thursday, I entered my kitchen determined to “get my bake on”. With my equally ghetto sister’s hen’s party looming, I had a few treats to make. Shout out to K-A and her fiance B-dog who liked it and put a ring on it.

It is often said that one doesn’t choose the thug life, it chooses them. And much in the same manner, these Cheeky Chocolate Shortbread Balls chose me. As a high school student wanting escape the torture that was Physics or Accounting, I managed to hustle my parents into letting me take Consumer Studies (the new school Home Economics). The kitchen and I became as inseparable as Biggie and Tupac, and needless to say, bitches have been baking ever since.

In an attempt to find a winning recipe for an assignment I decided to bake a piece of chocolate in the center of a shortbread cookie ball. I should probably point out that I wanted Cadbury Dairy Milk chocolate, and having sent my mother on a Pick ‘n Pay drive-by armed with her finger pistols and a list of ingredients that she dare not return home without, I waited patiently. Upon her return, she had Top Deck (I repeat, Top Deck) in her shopping bags. I almost cut a bitch that day, but lucky for her, the Top Deck was an absolute win and I’ve been making them that way for 6 years now.

In particular, this one’s for Carmen Hart (who ate a whole batch of 32 during a double accounting), Nikki-Kim Yates (who talks about these every time she sees me), Kourtney Lello (Who only eats the shortbread part) and to Mrs Eaton, our high school tuck shop lady who paid me a small fortune to bake these for her to sell at a profit to my fellow students. (This came to an abrupt end in matric when she discovered that the girls had decided to cut out the middle man and buy direct from me. Don’t hate the player, hate the game).

These cookies can be made on a ghetto budget as they contain only 5 ingredients, the same number of Best Rap Album Grammys won by Slim Shady himself. Coincidence? Absolutely not. To assume so would be utterly Ludacris (you see what I did there?)

But ghetto-isms aside, these cookies are the simply the heat! So without any further delay, I present to all in all of their Thug Life Thursday glory, my Cheeky Chocolate Shortbread Balls.

Yours in Baking & Bitching, (because “xoxo” was too mainstream) 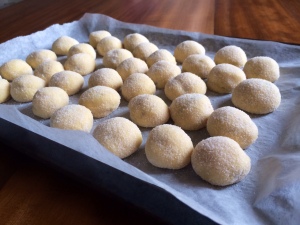 Health Hack: Substitute the castor sugar in the dough with Xylitol and skip the castor sugar coating when they’re baked. Still not skinny enough for you? Swap the cake flour for almond flour. But be warned, this will change the texture of the cookie.